We built Topaz Video AI v3.0 from the ground up to include new functionality, such as video stabilization, improved enhancement capabilities, and a better user experience. Using this new code base allows us to provide some of your most requested features, such as:

We originally built Video Enhance AI to improve the most common quality issues affecting videos, including de-interlacing footage, intelligent upscaling up to 8K resolution, and seamless frame rate conversion. Because it treats video as a series of constant rate images, it led to problems when the app’s AI models had to process variable frame rate footage, frame repeats, and scene changes. It also complicated our ability to develop new models to address stabilization or scene detection because they require multiple passes over the video.

To develop these new features and to continue innovating, we built the next generation of this app atop an entirely new code base and a brand new user interface with numerous functionality improvements, such as stacking multiple AI models, executing parallel tasks, and project queue filtering.

The new features included with Topaz Video AI v3.0 can be broken down into two categories:

You can now enable more than one AI model in a single task, allowing for a more flexible workflow. For example, you can now upscale to 4K resolution while enabling stabilization and adding grain.

You can also use the new filtering options to display process jobs for the selected video file or all loaded video files and filter by output preview tasks, export tasks, or both.

For example, the script command in the screenshot above will issue the following instructions:

Learn more about using the new command line interface on our Support Center.

The new stabilization model reduces shaky or jittery motion that often results from an unstable camera. It does so in two steps:

Traditional methods rely on finding and matching individual feature points between frames to determine the camera motion. Still, it may be unreliable if the frames contain challenging scenes such as low contrast regions, illumination changes, motion blur, and moving objects.

The new stabilization AI model considers the entire frame instead of an individual point. We trained the model with challenging video samples to perform better than the traditional feature-matching algorithm.

Most stabilization methods need to crop the composition to remove the missing regions created after transforming the frames, which can affect the footage's intended framing. Therefore, in addition to the Auto-Crop option, Topaz Video AI offers Full-Frame stabilization, which generates the missing region using neighboring frames and AI models.

Like our original slow-motion AI models, Chronos and Chronos Fast, the new Apollo model interpolates between frames to create a slow-motion video and convert frame rate. However, the Apollo model is trained to handle non-linear motion and motion blurs. It considers four adjacent frames to estimate the motion of objects between those frames, which helps the model understand the non-linearity of the motion and interpolate in-between points accordingly.

The Apollo model is best suited to slow down the motion in videos containing non-mechanical movements (e.g., human or animal movements or hand-held camera footage). We recommend trying the Apollo model before Chronos or Chronos Fast if the video has any blurriness.

Topaz Video AI v3.0 is the next generation of AI-powered video enhancement. Completely rebuilt from the ground up, it delivers greater quality, functionality, and flexibility thanks to our new user interface and AI models. Download a free trial of Topaz Video AI today to see it for yourself. 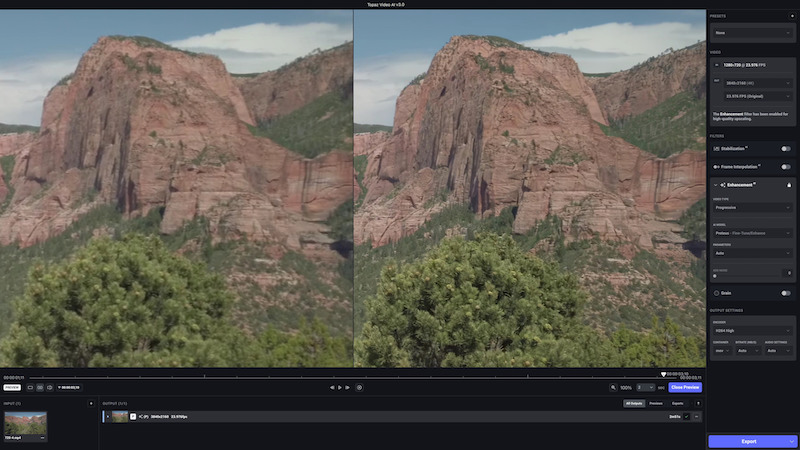 We built Topaz Video AI v3.0 from the ground up to include new functionality, such as video stabilization, improved enhancement capabilities, and a better user experience.